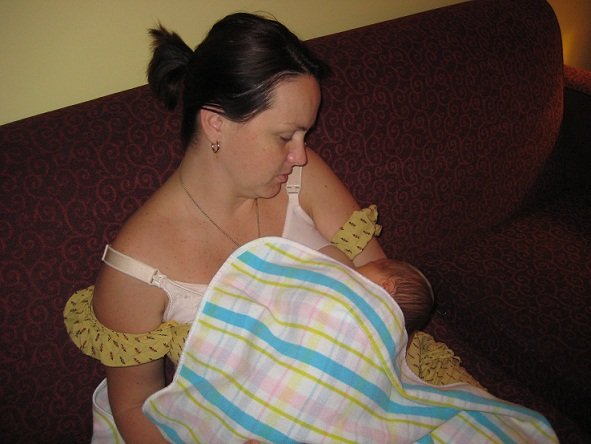 Four years ago when I was pregnant with my daughter I was certain that I would breastfeed. I did have an idea that it may not be really easy but I felt confident that this is what I was going to do. My daughter was born and my midwife showed me how to attach her. She attached well and starting drinking. That night back at my room I kept practicing and it seemed to be coming naturally and easy. Then my baby started crying. The midwives came in and told me that she was probably hungry and gave me a form to sign so they could give her some formula. I had no idea what to do but I did not want my baby to be hungry so I signed it. They took her away with them. I was sitting in bed thinking “Where is my baby?”. A nurse then brought me a breastpump and told me to use this and it would help to bring my milk in. I could not express one drop. I could hear a baby crying in the corridor and I didn’t know if it was mine or not. I got out of bed and went to the nurses station and asked, “where is my baby?”

The nurse replied, “She is sleeping in the nursery”.

“Did she take the formula?”

“No she didn’t want it” came the reply.

I went into the nursery and saw my baby girl sleeping with a dummy in her mouth.  (This is the only time in her entire life that she has taken a dummy). I went back to my room and cried. I wanted to have my baby with me. In hindsight I should have told them I was taking her back with me. It didn’t really seem like they were giving me a choice. Four hours later they brought my crying baby girl to me and I breastfed her. I never let them take her from me again and I told them she does not need formula. During the night my protective instinct for my baby had kicked in and I refused to let her out of my sight again. In hindsight too now I know that I should not have been using a breastpump, my baby should not have had a dummy and I should have been comforting my baby with my breast at the same time stimulating my milk supply. How can these professionals give such bad advice? Do they not know any better?

Before I could leave the hospital a lactation consultant came and saw me. I explained to her that it was hurting a little bit when my baby latched on. She told me that was not normal and that I was not attaching her properly. I really had no idea what she was talking about. She showed me diagrams but they didn’t really make much sense to me. I saw that the nipple was at the top of the babies throat in the pictures and I was a bit confused. There is no way my nipples are long enough to go that far down my babies mouth! I questioned myself, “maybe I can’t do this”. I desperately wanted to go home with my baby and the lactation consultant was telling me I should stay in hospital until I get this right. She asked me to attach Madeline again and I did and I lied and told her it did not hurt that time. She signed off my forms and told me I could go.

Breastfeeding continued to hurt when I got home and I didn’t know what was going on. It hurt to attach her and sometimes it would sting while she was feeding. My nipples were starting to crack and bleed. I tried every type of cream I could get my hands on. I went to the doctor and asked their advice and they prescribed me a couple of creams which didn’t help. A couple of days later my cousins came to visit and noticed that my daughters tongue was coated in white. I had thought the white substance was breastmilk. My cousin said she thought it was oral thrush. She told me to get some nilstat.  I did this and started treating my daughter and putting anti-fungal cream on my nipples too. I later found out that it is quite common for this to happen if you are taking anti-biotics at the end of pregnancy (I had a suspected Urinary Tract Infection). My doctor never told me that this would be side affect! Thanks for that mate!

I was getting to the point where I was dreading the next breastfeed. It hurt so much. It was hurting my baby girl too because her tongue was hurting. I felt very overwhelmed and had no idea what to do. I got my husband to make up some formula. I had some samples from a baby show I had been to. I tried to put the bottle in my daughters mouth and she refused it. She would not even attempt to try the formula. So I sat down again and started to cry. I knew it was going to hurt. My toes were curled as I attached her. It hurt so much. Some days were better than others depending on how often she fed. Sometimes the thrush on my nipples would clear up and then we would re-infect each other because it hadn’t totally gone from her mouth. It was no longer visible on her tongue so I thought it was cured. However there were white spots on her gums.

One day I was talking to my mother in law on the phone. I told her I had been to the doctors and tried every cream in the book. My daughter was 10 weeks old. She would not take formula and I was still breastfeeding. She told me to sunbake as much as possible with my t-shirt and bra off. I needed to keep the area really dry. I did this for two days and like magic I was healed.

Ten and half weeks of pain. This could have been avoided. I should not have taken antibiotics and I should have used the natural healing of the sun sooner!! I went on to breastfeed my daughter until she self weaned at 20 months. It was one month before my son was born. I had severe morning sickness during my pregnancy and lost a lot of weight with my son and suspect I may have lost a lot of my milk. I was sad that my daughter stopped feeding as I had wanted to tandem feed her and my new baby.

One month later my son was born and he attached perfectly. I have not had one moment of discomfort or pain. George has just turned two years old and is still breastfeeding.  I love breastfeeding and very happy to do it wherever I need to. If my baby is hungry I will not deny him food, no matter where I am. Breastfeeding is normal, sometimes it doesn’t come as naturally as we like but if you can get through the hard times it is well worth it.

Nipple soreness, described by most women as excruciating!,  which is caused by a fungal infection such as thrush( Candida albicans, a yeast infection), can occur if you or your baby are treated with antibiotics (which kill the natural gut bacteria), during summer and in hot humid climates (which encourage yeast growth). This is why exposing your nipples to sunshine and fresh air and keeping them dry is helpful. Nipple thrush may also occur if you have vaginal thrush or if you or your partner have tinea.

Symptoms of nipple thrush are red and stinging nipples (check baby’s mouth for white spots if this occurs) and/ or a burning pain deep in your breast during feeds. If your baby is affected he may suddenly have difficulty latching on or fuss unusually while breastfeeding. Look inside your baby’s mouth: thrush produces a white cheesy substance, which won’t wipe away, on the insides of baby’s cheeks or tongue. In the early stages, thrush may not be obvious in your baby’s mouth – your first warning may be excruciating, shiny red nipples and your baby may develop a sore, red angry looking nappy rash.

Meanwhile, there are some environmental precautions to take to alleviate thrush:

From one to two – tandem feeding with just about everything in between!

Breasting out in public – Pia finds her groove