Second time round – I really am a breastfeeding mum! 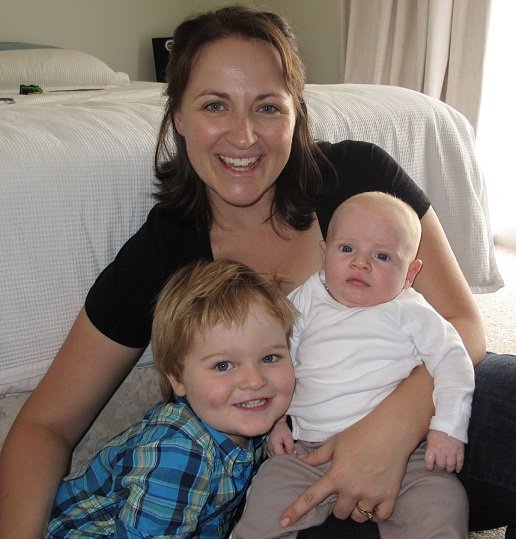 I am a second time Mum but felt like a first timer when learning to breastfeed my second child.

My first son James was born by caesarean and sadly breastfeeding did not work out the way I had imagined. A very hungry boy from the moment he was born, bruising and bleeding ensued. I experienced pain during and between feeds and I was unclear as to how to fix it. I spoke to my Doctor, local Health Clinic nurse and the breastfeeding hotline. During a time of high emotion, crazy hormones and the stress of my husband and I moving house and finding work in a new town, I was not successful in feeding James. Moving him to a bottle meant there was one area in my life I could control, where I could see clarity and feel comfort in the routine. From one month of age he was on formula and is now a very healthy, gorgeous 3 year old boy. For me, I did feel a sense of sadness and at times regret for not persevering. I knew I wanted to try again with our next baby.

Alexander was born in January this year, again by caesarean. This time I took more control in the preparation of Alexander’s birth and made it clear that I wanted all of the post birth elements that come along with a natural birth. Alex was placed on my chest straight away and he stayed with me during recovery where he had his first feed. OUCH!!! The pain was back but this time I was so in love with this new little person that I did not care. Hmm…not really the best way to go about it.

During my hospital stay I continued breastfeeding through the pain, bleeding and ridging. Tensing up when I pulled him in for a feed, kicking my legs and closing my eyes to distract myself from the pain. Midwives, nurses and lactation consultants checked my latch and from their angle it looked good. Really? But what about the pain? Depending on who I spoke to I received conflicting advice. Yes it does hurt a little, it should go after 30seconds. No, you should not feel any pain at all. The voice in my head was trying to make sense of it. We left the hospital breastfeeding with the occasional top up of formula as I was advised my milk had not completely come in.

Okay, now comes the task of settling in at home with a newborn, a soon to be 3 year old and a post caesarean body. During my first night home with Alex I lost it, the tears started and they did not stop. The pain continued and I honestly felt like I was back to where I was 3 years earlier with my first son James. I did not want to head down the same path, I wanted to get through it but man it is hard when every feed relies on you. What feels like nearly every hour, you have a little person new to the world and new to eating trying to latch on. Argh! Why is it so painful and how do I recover and keep going?

Those first few weeks at home with Alexander were just a haze. The bleeding healed but the ridging and pain continued. Oh my god my nipples have never looked so out of shape and just wrong. Again I spoke to my Doctor, Health Clinic Nurse and the breastfeeding hotline. I was told again that my latch looked good and good milk transfer was taking place. The advice kept coming to watch every latch and take him off if it did not feel right and that the pain will eventually go after the 6 week mark.

Over and over again people were mentioning the magic six week mark. I am a goal orientated person so during the pain and tears I set myself a goal – keep going and make it to six weeks and then review.

For the first couple of weeks we were giving Alex one bottle feed per day and to be honest this is one of the things that saved me and breastfeeding. When I was at breaking point, uncontrollable tears and just exhausted, knowing either myself or my husband could give him his last feed for the day via formula made a difference. I had space and time to re-group and tackle the night feeds. Eventually we dropped the formula and by four weeks every feed was a breastfeed BUT, the pain was still there.

I talked to friends and family about breastfeeding asking questions about their experience. It was at four weeks that I realised I needed to do something if i was going to see any improvement at the magic six weeks. I knew Alexander’s mouth needed to be wider and his tongue needed to drop down but I had no idea how to teach him.

The next best thing I did was call a Lactation Consultant. Lorraine visited me at home and it was amazing that within a few minutes of watching me feed she showed me how to start fixing the problem. Moving my hand back so his head could drop back further to allow his mouth to open wider. To rub my finger on his bottom lip prior to every feed to tease his tongue out. Also to keep poking my tongue out at him when we looked at each other between feeds. It was amazing to see him copy that expression. My toddler loved it as well, he could take part in the feeding process and have a giggle along the way teaching his little brother to poke his tongue out.

Following this I had several more appointments with the lactation consultants and nurses at my local Health Clinic. Absolutely the best thing I could have done. The support, the chance to have someone watch me feed and to check Alex’s weight was fantastic. I was determined not to do it alone and to call on as much help as possible.

By about week seven and eight the pain started to ease, I was feeling more confident and Alexander appeared to be getting the hang of this feeding business. I made it to my goal and beyond.

It was hard. Lack of sleep. Pain from both the feeding and my caesarean. Adjusting to life as a mum of two. Family and friends telling me to just put him on the bottle. My inner strength and commitment to the cause was being tested every day.

Countless hot showers to ease the pain, lots of food and chocolate to keep my energy up and encouraging words from my husband are what kept me going. At times my husband reminds me how hard it was in the beginning and how easy I make it look now. He is so proud of me and I am too. I really am a breastfeeding Mum.

Natalie Doolan is a mum of two beautiful boys. She lives in New South Wales, Australia.

Pumping, potions and pills – from low supply and self doubt to a beautiful breastfeeding bond