Breasting out in public – Pia finds her groove 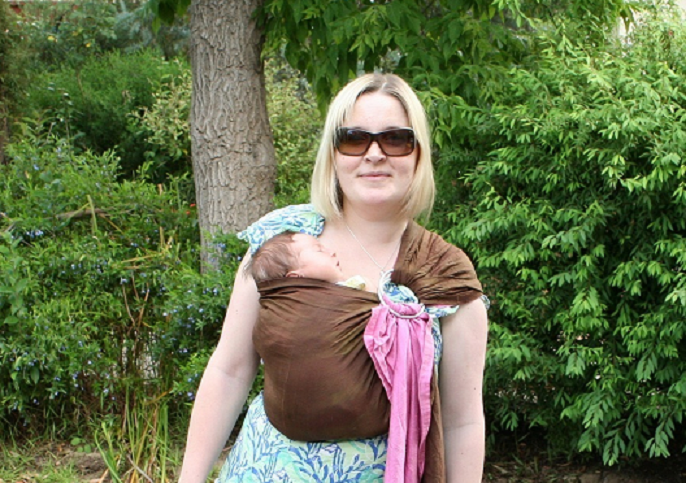 Breastfeeding in public was a no-brainer to me. My whole life I had lived and breathed women’s rights. I believed (and still do) that no one had the right to suggest that we should be confined to private spaces only while feeding our children.  I couldn’t believe that feeding in public was even a topic to be discussed. I hated the hypocrisy in our society, in which it was acceptable, desired even, to expose most of your body on magazine covers, at nightclubs, on the beaches, but having a baby attached to your breast was a source of conflict.

My inner lactivist wanted to help make a difference and normalize feeding in public. In theory, I was full of witty comebacks and ready to hand out blankets to people, had they dared to say something negative about it. The blankets, of course, would’ve been for them to pull over their heads so they didn’t have to put up with such a natural sight and be reminded of the fact that breasts were not originally created to help Hugh Hefner build his empire.

In reality, however, there was no denying the fact that I felt uncomfortable initially.

First there was the engorgement. Going up by two cup sizes in a matter of months had left the skin stretched so tight it was shiny. One wrong move and I was sure I was going to end up like Monty Python’s Mr Creosote after eating the last after-dinner mint. Rock hard, it was a mammoth struggle for a tiny mouth to get a hold of it as it wouldn’t give in an inch.

As well as making me physically uncomfortable, the engorgement also caused some other difficulties during the early weeks. Once the milk got moving, the jet hose-like letdown would’ve left many a fireman wonder why their equipment couldn’t do the same. If I let the baby to have a go at the spray that seemed to go on forever, she would cough and splutter and inevitably get stomachache and scream the house down afterwards.

While waiting for the milk production to settle, I had been advised to do a workaround. I would let the baby to suckle just long enough to produce a letdown, unlatch her and catch the initial flow in a towel. I learnt that it helped with the stomachache, but I also learnt that hell hath no fury like a hungry baby who has been given a taste of milk and them promptly removed from the source.

Then there were the wardrobe malfunctions. While still pregnant, I had bought some feeding tops with a “clever” inbuilt bandeau design to be used during outings. All you had to do was use one hand to pull the main top aside, one hand to move the bandeau bit up and unhook the bra, one hand to hold the nipple so that the baby would at least have a chance of getting the monstrosity in her mouth, and one hand to lift the baby up so she could latch on properly. Easy.

If you’re an octopus.

I also found the constant focus on my breasts a little unsettling. Even harmless remarks such as ‘look at that baby sucking so hungrily’, and positive words meant for encouragement: ‘such a chubby little baby, you must have good milk’ left me feeling like people were invading my privacy, like I was a prize cow whose milk production was out there for anyone to judge.

Then there were actual contacts with people I knew. For instance, the new Mum in me was eager to go out and let my old workmates meet our precious newcomer. The old work-me, however, was not used to unbuttoning my top in front of them. I could’ve of course excused myself and used a feeding room, used a breastfeeding cover, or, just stayed at home. I didn’t want to.

I wanted to get over myself and I wanted any negative feelings to abate, so instead of working towards naturalizing breastfeeding in public in our society, I started taking conscious steps towards naturalizing feeding in public to myself. First it was by meeting up with other mothers, who were also feeding their babies. Then there were different kinds of parent-baby groups, baby yoga, baby music, even mum and baby movie sessions. I surrounded myself with people for whom feeding a baby was the norm, regardless of their methods. Little by little, my confidence grew, the feeding got easier, and I no longer resembled a frantic octopus while feeding my baby in public.

After eight weeks of four hourly block feeds, the milk production finally settled and matched the demand. The engorgement disappeared and while the letdown remained strong, my baby learnt to cope with it as she grew older. I found breastfeeding singlets that allowed me to pull up my top while keeping my stomach covered.

Eventually, I reached a point where I no longer felt any twinges of discomfort when my baby showed hungry signs, and we went on to feed for 23 months at when she self-weaned. By the time baby number two was born, I had enough tricks up my sleeve to navigate through those early weeks with much more ease than the first time round and feeding in public didn’t faze me any longer.

My childbearing and breastfeeding days are now over, but I have a lifetime of happy memories left of that time. More importantly, I have no regrets. Many may wonder why I insisted on feeding in public if it made me uncomfortable in the first place. I may have not changed the world, or even influenced one person, but I still believe that it was best decision for me and my family, and that’s all that really matters in the end.

Pia Rowe is a Canberra mum of two little daughters

When baby refuses the breast – weaning or a nursing strike?