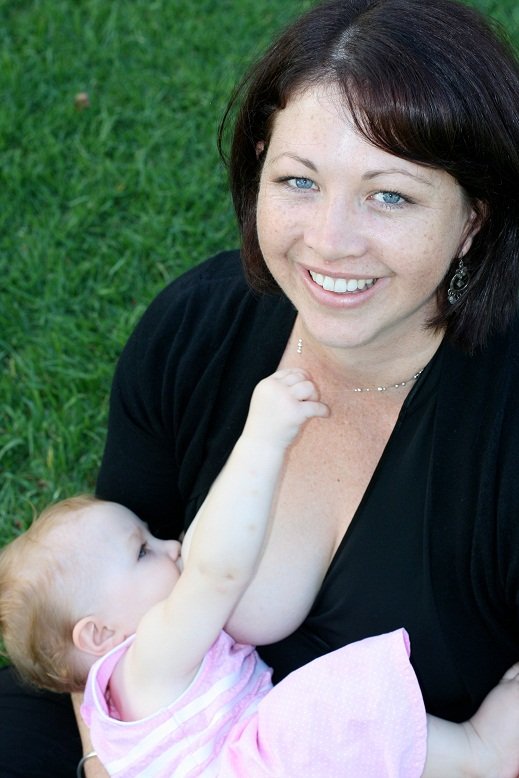 One of my first memories after waking groggily from a General Anaesthetic was to ask if my baby had survived. She had. I then submerged back into the haziness of waking up, shaking from the anaesthetic and waiting in recovery. My uterus had ruptured and torn in five different directions during early labour, and my daughter had been born via an emergency c-section, ten minutes after an alarm was pressed in the assessment room. She was delivered feet first as her head and arm had come out of my uterus and into my abdomen.

After being separated from my baby, Grace, for hours whilst undergoing surgery, a midwife arrived, smiled and said to me, “Let’s go meet your baby and have that skin to skin time.” Although my memory is foggy, my husband still recalls with glee that they plonked her on my tummy and she just knew where to go. Despite the time away from each other, and a feed of artificial baby milk during our separation, Grace crawled straight to the breast and latched on.

Breastfeeding after a traumatic birth was unbelievably healing. We’d both survived an incredible birth and she was close, in my arms and we were one. I asked friends and family to give us space whilst I recovered in hospital and I clung to her, fed her and breathed in that beautiful smell of her newborn head. In the immediate days after her birth however, I began to experience symptoms of post-traumatic stress (PTS). I had nightmares, recurring dreams, hourly flashbacks and intrusive thoughts. In essence, we ‘lost’ the very early months of Grace’s life as we were consumed by these symptoms of PTS.

On a day to day basis I was struggling with what was to become Post Traumatic Stress Disorder (PTSD). Those early days tandem feeding the girls were wonderful but also a constant prompt to indulge in the ‘what if’ thinking. This occurred more frequently during night feeds when the world seemed so quiet. As my milk let down and filled my breasts, I would gaze at this little miracle and fall deeply in love with her, but in those quiet hours, I would also look at this tiny human and be reminded of the trauma that we had endured, how close I came to losing her, and how close I came to losing my own life. Horror soared through my mind regularly.

Experiencing PTSD related to birth trauma allowed for an eruption of issues related to previous traumas that I had experienced during my life. My PTSD became quite complex and my mental health really deteriorated by Grace’s first birthday. I suffered from severe insomnia that was worsened by regular night feeds. I would wake to feed Grace during the night but would then remain awake between feeds, ruminating through various details of trauma I was working on with my psychologist. This chronic sleep deprivation proved only to escalate the PTSD that was compounded by suicidal ideation, feelings of utter distress and difficulty regulating my emotions.

Mental illness had an impact on everyone in the family. My husband, Howard, struggled through his own PTS to give me unfaltering support. This was complemented by support from friends and family and an immense amount of support from PANDA (an organisation that provides support for parents with perinatal mental illness).

When Grace was 13 months, I was admitted into a mother and baby unit in a private psychiatric hospital. Because Grace was walking, I was not allowed to have her stay so for the first time in our lives, we were separated. I was desperate to have her stay but had to comply with hospital policy. In hindsight, I needed time by myself to be able to progress through my illness. Every day spent in hospital saw me expressing to initially supply my baby with breastmilk, and to then maintain my supply. The nurses in the unit supplied me with a breast pump and were both supportive (and impressed) by my continuation to keep up my milk supply.

One of the most difficult aspects of being in hospital was the separation from my daughters. I missed our snuggles, Grace’s breastfeeding acrobatics, and the unrelenting eye contact that occurs during the quieter feeding times. Having visits from both girls, and my husband, was wonderful. Darcey (3 and a half) and Grace  (13 months) would want a lot of physical contact with me after being away from each other for days at a time. Grace would communicate very quickly that she wanted a feed and we would often spend the first 20 minutes of their visit sitting, with no indication that she was going to let that boob out of her mouth! Maintaining my supply during the days we didn’t see each other proved to be invaluable. Sustaining that breastfeeding relationship with Grace was so, so important to me and a really important part of staying connected to the here and now, and staying connected to my purpose – to survive and conquer PTSD and to be able to live fully in my life.

I underwent intense therapy in hospital during my five admissions, over a four month period. The intensity of the therapy assisted me in working through past traumas but I had a great deal of difficulty dealing with my emotions and I continued to have suicidal thoughts, would frequently disconnect from my body by dissociating, and felt a strong desire to run away. During one admission, I was placed under an Involuntary Treatment Order (I couldn’t be discharged until my psychiatrist deemed me well enough) and I also spent time in the special care unit.

A key part of my treatment in hospital was medication. Initially I was resistant to accepting breastfeeding safe medications because I didn’t want to pass any quantity of drug into the body of my growing toddler. I soon realised I needed medication to tolerate the intensity of my therapy, and to assist in working towards wellness. Knowing that breastfeeding wasn’t at the forefront of my psychiatrist’s mind, I regularly contacted the lovely Rodney Whyte at the Monash Drug Infoline to seek reassurance when medications were added or increased.

Coming home from hospital was always difficult. Hospital and home were two very different environments and the demands were leagues apart. My girls needed huge amounts of physical contact and my breasts were definitely utilised frequently!! Grace in particular would demand feeds 20 times a day until she got used to the idea that her mum (and boobs) were staying. It was lovely that at 17 months, breastfeeding was still a beautiful way of reassuring my baby girl that we were close, connected and had a secure attachment.

I am so pleased I was able to maintain my breastfeeding relationship whilst dealing with the complexities of PTSD, and especially during hospitalisation. Darcey (almost 4) will still have a feed on the rare occasion and Grace is well attached to her “baboo’s”. It’s a pleasure to find myself more connected and present in the moment, especially when I am breastfeeding. There are gaps in the last 19 months that have been consumed by trauma, the impact of trauma and separation, but interspersed are moments of connection and love, and those memories are the ones that help add to this incredible period in my life.

As a trainee Breastfeeding Counsellor, my time spent dealing with mental illness has taught me that everyone has a story. I met women who were desperate to breastfeed who had to stop because the medication they needed to take was evidenced to affect their young babies, and I watched them grieve the loss of their breastfeeding relationship. I also met mothers whose anxiety overtook their logic, despite understanding that their baby was getting enough milk, or that they themselves were producing enough milk. And too often, I met mums, like myself, whose mental illness led to such severe sleep deprivation that they could not function. At times though, I felt privileged to be in a place to be able to give mother-to-mother support to reassure breastfeeding mums that they were doing an awesome job, or to point them in the direction of resources to support their breastfeeding knowledge and skills.  The diversity of these experiences will certainly add to my skills as a future Breastfeeding Counsellor.

It is fantastic to be almost well and to have moved through, and let go of, the weight and presence of traumatic experiences. I have worked really hard with some amazing mental health professionals to get to this point of wellness. My journey has been tough but unbelievably rewarding. I have learnt so many skills, made friendships with courageous women who have battled various mental illnesses, and I have gained my life back. I have gained this moment right now and I have gained a future with my family.

“I just wanted to mention that I made contact with PANDA because they were listed as a resource in the back of your Parenting by Heart book that I was reading when Grace was about 7 weeks old. PANDA have been such an important part of my journey. Thanks for putting that resource in! I’m not sure I would have survived the journey without PANDA’s support.”

PANDA (the Post and Antenatal Depression Association) is a not for profit, specialist national organisation that raises community awareness of depression and anxiety during pregnancy and after birth (perinatal period); and provides support services to families to assist in their recovery.

Cathy Turrall is a courageous mum of two. She wrote this story for The Australian Breastfeeding Association Magazine, Essence and generously shared it here.

Breastfeeding with formula topups – without guilt or shame