Breastfeeding success – thanks to persistance and a great support team! 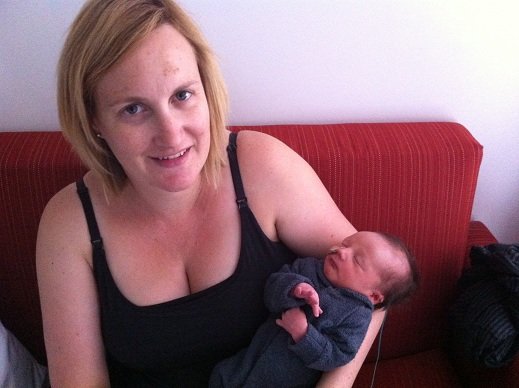 I never thought I would be able to breast feed.  Both my sisters had no luck with their supply and bottle fed their children (and they have all turned out fabulous!), but my own breastfeeding journey was different!

At 35 weeks I was diagnosed with pre-eclampsia which resulted in me being hospitalised for bed rest. I managed to get through to 36 and 5 days and then our gorgeous little Ewan was born. Unfortunately he had no suck reflex, was admitted to the Special Care Nursery and had a naso-gastric tube inserted.  One of the worst things is watching a tube be inserted down your tiny baby’s nostril!  With the help of a patient midwife, we managed to express a small amount of colostrum a few hours after he was born. This was fed to him via syringe and until my milk came in he was on formula.

Each day I would use the Nursery’s electric pump and try to express milk. For the first three days I could only get between 5 and 10ml but the midwives made such a big deal about any amount of milk, it kept my hopes up that we might get to breastfeeding one day. To tell you the truth, I felt like a cow and was embarrassed for my husband to see me hooked up to this pumping contraption. But I would try anything to get my milk into Ewan.

On the fourth day I was discharged from the hospital and had to leave Ewan in the Nursery, I visited him each day from 9am in the morning to 9pm at night.  That first night home my milk came in with force! I remember expressing 80ml off one breast in 15 mins and sending a photo text to my best friend telling her I was so proud of myself! After that I expressed every 3 hours and Ewan was fed whatever I had and was topped up with formula if needed.

Each day if Ewan wasn’t too tired we would try him on my breast every second feed. It was disheartening when he wouldn’t latch, but the midwives kept my spirits up and the one on one time I had with them really gave me insight into what to look for and how he should be latching.  We tried a nipple shield in case his little mouth wasn’t able to grasp onto my nipple properly and he would try and suck but still had no success. Then on the 7th day he finally latched and sucked for a whole 2 minutes! It was a very exciting time. We then tried him on my breast each feed during the day and he gradually built up to 10 minutes with expressed milk top ups when he got tired. For his feeds at midnight, 3am and 6am he was then started on a bottle of my expressed milk and took to it like a fish to water. Once he had a whole 24 hours of ‘suck’ feeding I was surprised by his tube being gone. It was now totally up to me, Ewan and my boobs to work together and become a successful breastfeeding team!

Two days later we were finally allowed to go home and since then we haven’t looked back.

Today Ewan is a chubby little 4 month old that you would never think couldn’t suck.  He loves my boobs and gets excited every time we are due for a feed!

I think persistence and having a great support team is essential for a successful breastfeeding story. It isn’t as easy as I thought… It is stressful and a steep learning curve. Sometimes it felt like I needed eight arms to be able to get him to latch and feed!!

I feel very lucky that I had so much help in the Nursery to get us to the stage where we are now a well-oiled breastfeeding machine! I owe a lot to our midwives…  I know in some hospitals it is hard to get the support needed off the midwives as they are stretched to their limits.  Maybe if my sisters had received the help I did in the Nursery, they may have had more success breastfeeding too?

Megan Williams is a breastfeeding mum from Victoria, Australia

Every breastfeed is a success

Breastfeeding by heart, creating time with my babies. Kate’s story.