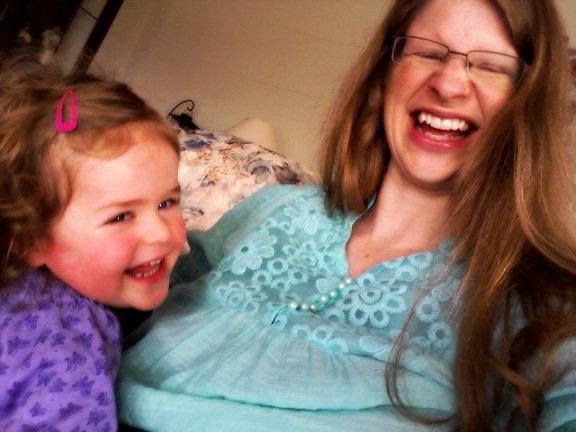 I love to research, so when I became pregnant, breastfeeding was one of many exciting new topics of discovery. I joined the Australian Breastfeeding Association and raided the local library for books and back issues of Essence magazine. I became an expert, in theory, on the art and science of breastfeeding.

Then my daughter was born. I’m thankful to have had an uncomplicated labour and lovely natural birth. My baby was placed on my bare skin and had a look around … but she didn’t latch on. Sleep was her priority and she waited till evening to fill her tummy. By morning I had blisters and feeding was painful. I was sat down in front of an ABA video about attachment but I already knew the information – putting it into practice was the problem. The midwife in hospital showed me one technique and the midwife who visited at home showed me another, both valid I’m sure, but they weren’t working for us. It seemed like her mouth was just too small to do it ‘properly’. I was assured it wasn’t a terrible attachment, just not quite good enough, and I persisted with sandwiching my nipple and flanging baby’s lip and wotnot for the next few days.

By day six I was getting rather cranky so my supportive husband rang the ABA helpline and a generous woman gave me her time and wisdom. One piece of advice was exactly what we needed: stop focusing on trying to attach my baby correctly and let her latch on by herself. I don’t know how much the attachment improved but the key was that I relaxed, causing the letdown to come quicker and the pain to end sooner. Within a week or two I was healed and we haven’t looked back.

This was the beginning of a wonderful baby-led breastfeeding relationship that my daughter and I still share two and a half years on. It has been somewhat like a dance. I had studied the steps in advance and had (mostly) reasonable expectations of what the dance should look like, whereas she has an instinctive feel for the music. She does what comes naturally and is not influenced by any unhelpful cultural expectations, so I’m happy to let her lead the way.

I had always planned to demand feed, knowing the supply and demand principal of milk production as well as the fact that babies nurse for many reasons besides just filling their tummies. I did expect that my baby would find her own routine, having heard so many mums say things like, ‘He’s due a feed’, but this didn’t eventuate. Never mind, I’m not very good at routines myself anyway – I’m more ‘go-with-the-flow’, which has proved a beneficial trait when it comes to parenting!

I also knew about the lovely CCK hormone released in mother and baby and the end of a feed, making both feel sleepy, so feeding my baby to sleep was always my plan. It therefore confused me to learn about self-settling and ‘feed, play, sleep’ routines. Once I realised that teaching self-settling is more about parent convenience than the biological needs of a child, I happily continued using nature’s design. Admittedly, I presumed (very wrongly) that my child would be settling herself off to sleep just nicely long before now! But I know I’ll never regret all the cuddles we’ve had as I’ve nursed her off to dreamland.

When my daughter was around nine months or so she became a fussy feeder, which appeared to be due to distraction rather than dropping feeds. She would still feed happily lying on a bed, so that’s where most breastfeeding occurred from then on. Only close to her second birthday did she become willing to feed in other locations. Having breastfed privately for so long, feeding a toddler in public has taken a bit of courage on my part, but I do so knowing that it is normal, natural and healthy human behaviour, if not the cultural norm.

With baby number two on the way, my milk supply dropped but it didn’t dampen my daughter’s enthusiasm for breastfeeding at all. She clearly feeds for comfort and reassurance, and perhaps some would criticise that she is using me as a dummy, but she is still just a little girl who needs her mummy and breasts are the original pacifiers after all!

I have always breastfed during the night as it has seemed the easiest and most natural way to help my daughter resettle. However, we’ve  recently successfully night weaned with very few tears. While I was a little sad to be doing any mother-led weaning, I was ready for this step and she has adjusted very well to the idea that milk sleeps at night.

Our next challenge will be tandem feeding. My switched-on little girl has already told me (more than once) that when baby is feeding, she’ll have ‘the other one’. We’ll see how it goes! I am hoping that continued breastfeeding might help ease the transition for my daughter as the practicalities of the new family structure hit home, allowing her to connect with me and bond with the baby. Whatever happens, and whenever she eventually decides she no longer needs Mummy’s boobies, I’m thankful for every day I’ve been able to meet my daughter’s various needs through breastfeeding.

Nerida taylor is a Melbourne mum, expecting her second baby

Why breastfeeding mummies need to ‘get em out’ in public